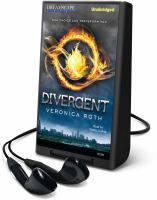 To see other titles in our catalog that have won the Middle School (Teen) Nutmeg Award, click here.

View all formats and editions (12)

Divergent
by Roth, Veronica; Galvin, Emma (Narrated by)
Rate this title:
vote data
Click an element below to view details:

Veronica Roth was born on August 19, 1988 in New York. She graduated from Northwestern University's creative writing program. She is a full-time author whose books include Divergent, Insurgent, and Allegiant. Divergent was adapted into a movie in 2014. In 2015 Insurgent made The New York Time Best Seller List. She also wrote four short stories from Divergent's character, Tobias Eaton's point of view. That book, entitled Four: A Divergent Collection, made the New York Times bestseller list in 2014. She wrote Carve the Mark which made the bestseller list in February 2017. The Fates Divided, which is the sequel to Carve the Mark, was publised April 2018. (Bowker Author Biography)